Drylok vs RadonSeal – A Comparison

A dry and structurally sound basement is the key to having a healthy house.

The foundation of your home is always the first to receive all the water coming from the surrounding.

This can seriously damage not just the basement but the whole house. In addition, there’s also a risk of radon and soil gas transmission,

These gases are particularly dangerous for your health, especially radon which is among the leading causes of cancer.

So, to make sure your home is a healthy living environment, you have to start protecting it in the basement.

The market is flooded with various sealing products which work to prevent gas and moisture penetration into the basement.

Below, I’ll take a deeper look into two products that are among the most popular and compare Drylok vs RadonSeal.

I’ll explain what are the differences between the two and when you should use each of them.

For years, Drylok has been holding the bestselling position among waterproofing paint products.

It’s very effective, simple to use, and rather affordable. Mostly used in basements, Drylok works to prevent the leakage of water from the environment into the basement.

It achieves this by penetrating pores in the basement foundation, walls, and floors to create a protective sealing layer on the wall surface.

In addition to preventing the moisture in the basements, Drylok is also successful in preventing powdery salty deposits, better known as efflorescence.

Drylok has a fairly wide range of waterproofing products, available in different colors and with different tints.

They have different variants that are suitable for various surfaces in the basement.

It’s important to remember that, while it will create a surface barrier to prevent moisture and humidity,

Drylok does not stop the outdoor water from seeping into the basement walls and foundation. 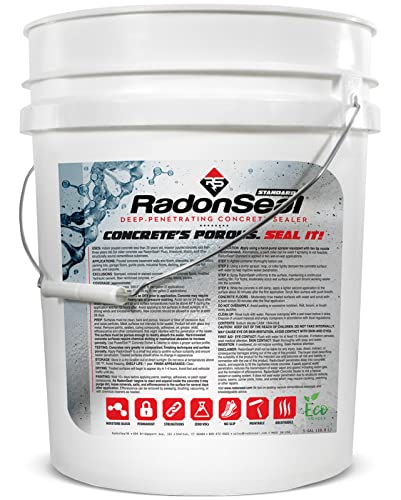 Another popular sealing product on the market, RadonSeal is the clear, waterborne, penetrating concrete sealer.

RadonSeal’s primary purpose is to waterproof and seal the poured concrete, as well as limestone, concrete blocks, and other high-strength cementitious building materials.

It works by sealing the concrete pores to create an impenetrable barrier so the water and water vapor can’t get through.

Besides reducing humidity, dampness, and moisture in basements, RadonSeal, as its name says, is also highly successful in reducing dangerous radon and soil gas transmission.

Plus, it also works great in preventing efflorescence,

RadonSeal works a bit differently than most of the other waterproof sealants. it doesn’t simply form the surface protective layer.

Instead, RadonSeal penetrates deep into the concrete where it chemically reacts and bonds to inherently seal the concrete matrix.

By doing this, RadonSeal permanently strengthens the concrete and makes it resistant to cracking, dusting, freeze-thaw, and other defects.

Drylok vs RadonSeal – What’s The Difference?

Drylok and RadonSeal are both used to seal the concrete walls but work in different ways to achieve this.

When you apply Drylok to the wall, it penetrates the concrete pores, but still, creates the surface layer to prevent water from leaking through.

This will likely keep the basement dry but may create pockets with increased pressure inside the wall which may lead to cracks and similar defects.

On the other hand, RadonSeal penetrates deep inside the block and reacts there to bond itself to the concrete, practically sealing it from the inside without forming the surface barrier.

This way, RadonSeal does not trap the moisture inside the concrete, behind the barrier, but rather allows it to breathe and naturally dry out.

Drylok vs RadonSeal – Which Is Better?

Which one between Drylok and RadonSeal is a better choice for your particular project will depend on what you’re trying to accomplish.

If your goal is to simply prevent the moisture in your basement, you can use Drylok which is easier to work with and somewhat cheaper.

Also, the company offers a 10-year warranty and Drylok will last longer than RadonSeal.

The advantage of the RadonSeal is that it’s more versatile.

Besides dealing with moisture, it will strengthen the concrete, prevent radon transmission, and more successfully prevent mold and mildew development.

Your choice of the sealant may also depend on what you want your basement walls to look like.

Drylok provides a textured, sandy finish and is available in various colors.

RadonSeal, on the other hand, does not leave any film or color on the wall and doesn’t change the surface profile or friction.

Can You Paint Drylok Over RadonSeal?

The manufacturer’s recommendation is to only apply Drylok over bare walls, meaning there’s shouldn’t be any existing coating on the wall surface.

However, RadonSeal doesn’t create a surface layer on the wall.

Furthermore, it reacts inside to purge dirt and minerals from the concrete, cleaning out the pores and making it suitable for painting with waterproofing such as Drylok.

However, the wall surface will still need to be scrubbed and washed after the RadonSeal application.

Can You Paint RadonSeal Over Drylok?

RadonSeal is supposed to be applied to the bare walls, so they can penetrate and seal the concrete from inside.

This means that you’ll have to remove any paint before the RadonSeal application.

Nevertheless, if the wall has been painted with only a single coat of latex-based waterproofer that doesn’t block the vapor, such as Drylok, you can use another RadonSeal product, Ion-Bond Armor, to seal the concrete.

However, remember, that existing paint will have to be cleaned first to remove any dirt from the pores.

Drylok and RadonSeal both can be of great help when trying to prevent humidity in the basement and make the house more healthy to live in.

Both products will help you reduce the moisture levels which will prevent mold growth.

Still, be aware that each of these products is just a part of the solution if you want to keep your home completely dry.

No waterproofing sealant will prevent the water from reaching the walls but only stop it from seeping to the surface.

So. for the full solution, it’s best to contact a professional and work on sealing the exterior of your home.

This should prevent any water from the environment from reaching the foundation in the first place.

Clear Caulk vs White – Which One To Use?

Drylok vs RadonSeal – A Comparison

Sherwin Williams SuperPaint vs Cashmere – Which Is Better?