Drylok vs Kilz – What Is Better?

Moisture is one of the homeowner’s biggest and most dangerous enemies.

If not dealt with on time, moisture and humidity in the house can cause all sorts of trouble.

These issues can ruin the aesthetic appeal of your home but also lead to more severe problems.

Moisture provides fertile ground for mold and mildew development, causes wood rot, and can even potentially compromise the structural integrity of the house.

So, some waterproofing is necessary to keep your house, especially the basement or garage, healthy and clean.

When it comes to waterproofing, chances are you’ll be using products from either Drylok or Kilz, as these are two of the most established companies in the industry.

However, it still leaves you with the question of which one to choose.

To help out, I’ll compare Drylok vs Kilz to see how they differ and which one may better serve your particular needs.

Drylok is one of the most popular water proofers, mainly due to its effectiveness, simplicity of use, and relatively low cost.

The primary purpose of Drylok is to stop water leakage on the interior masonry and concrete walls.

Mainly used in basements, this product is supposed to seal walls, foundations, and floors and create a layer that will stop the water from seeping through.

Unlike regular paint that only covers and bonds to the surface,

Drylok penetrates the masonry and concrete pores to form an impenetrable barrier.

Drylok offers several waterproofing products and depending on the type you choose they may be oil or latex-based.

Even though most of the time people use it to get the white, sandy finish, Drylok is also available in 4 ready-mixed colors, as well as 6 different tints. 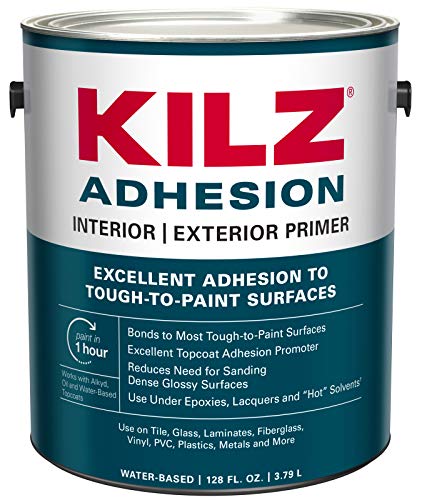 Similar to Drylok, Kilz works by sealing porous masonry and concrete in order to prevent moisture from seeping to the surface.

It’s used both on the interior and exterior surfaces to create water and vapor barriers, but is most commonly applied to above and below-grade basement walls, cinder and concrete blocks, and brick.

In addition to creating a protection layer, Kilz also provides a smooth, long-lasting, and resilient finish, so you can use it as a final coat.

Kilz also works to prevent any foul odor and seal the stains on the wall surface. It’s easy and simple to work with and dries rather quickly so you can finish the job in just one day.

After one hour, it’s dry enough to touch, while after four hours, you can start recoating if needed.

The covered surface fully cures in just 14 days and then it’s ready for washing or cleaning.

Drylok vs Kilz – What’s The Difference?

Even though both products are used for, more or less, the same thing, Drylok, and Kilz still have some differences which make each of them more suitable for certain projects.

One of the main distinctions is in the ability to withstand hydrostatic pressure.

The water inside the wall constantly applies pressure to the surface barrier, so the better resistance, the less possibility for the waterproofing coat to crack or flake.

Kilz is capable of withstanding 12 PSI of water pressure, while Drylok is rated at 10 PSI. However, Drylok Extreme can take up to 15 PSI.

As for durability, both products come with a 10-year warranty, so you can expect Drylok and Kilz barriers to last about the same.

Kilz will, however, provide a more smooth and better-looking finish.

Both Drylok and Kilz are fairly easy to work with, although the latter takes less time to dry, so your project will likely finish faster.

Drylok vs Kilz – What Is Better?

Drylok and Kilz are both deservingly among the most popular waterproofing products. So, which one you will use mainly comes down to personal preference.

However, you should take into account the existing surface you plan to cover with either of these products.

Drylok works best when applied to bare concrete or masonry.

On the other hand, you can freely use Kilz over the existing coat of paint, no matter if it’s oil or latex-based.

When it comes to finish, Kilz is thicker and will provide a more even and smooth finishing surface.

The drylok finish will be more textured, but it will provide a wider choice of colors and tints.

Can You Paint Drylok Over Kilz?

As I already explained, Drylok is designed to be applied to bare walls.

If used over the coat of oil or latex-based paint, it is likely to lose its waterproofing abilities and disrupt the chemical structure which allows it to penetrate the concrete pores.

As Kilz is oil-based, this means that painting Drylok over it is definitely not recommended.

Drylok over Kilz will still have a nice appearance and texture, but it won’t stop the water from penetrating inside.

So, if you plan to use Drylok, but the surface is already covered with Kilz, make sure to thoroughly remove the original coat.

Can You Paint Kilz Over Drylok?

When properly dried and cured, Drylok is very receptive to other oil or latex-based paints.

This means if the wall was originally covered with Drylok, you can paint over it with Kilz.

It will only enhance the anti-mold protection and help hide some of the more stubborn stains Drylok hasn’t been able to deal with.

Just remember to, prior to applying Kilz, let Drylok dry for at least 24 hours.

Moisture issues mostly appear in basements and garages which are rarely in the focus when it comes to house design but should in no way be neglected.

These spaces are mainly made of concrete which is a very strong, but rather porous material which makes it prone to absorbing water.

Because of this, you will have to protect your walls and foundation from water leakage somehow, and Drylok and Kilz are your best bets to do so.

Both products have their advantages and downsides, but each should be able to provide satisfactory moisture protection and slow down mold and mildew development.

However, bear in mind, that for a full waterproofing solution, you’ll have to fully seal the house foundation from the outside.

Are Glass Dining Tables Out of Style In 2022? (Answered!)

Is Primer Supposed To Look Streaky? (Answered In Detail!)

Do Dining Chairs Have To Fit Under The Table? (Solved!)

Sherwin Williams SuperPaint vs Cashmere – Which Is Better?